The vibrant journey of WhatsApp messenger app has reached another milestone a couple of days ago. After touching a whopping active user base of 700 million this January, the number jumped up to 800 million in just 4 months. Adding 100 million users in its database is more than amazing for the WhatsApp.

In a facebook post, co-founder and CEO of the company Jan Koum broke the news. He also announced the inclusion of certain new features in the WhatsApp for Android. The latest version will enable users to take backup/ restore options for chat history and media via Google Drive.

In January, Koum reveled that WhatsApp had a massive exchange of over 30 billion messages every single day. But this time he hasn't disclosed any such data on messages exchanged. 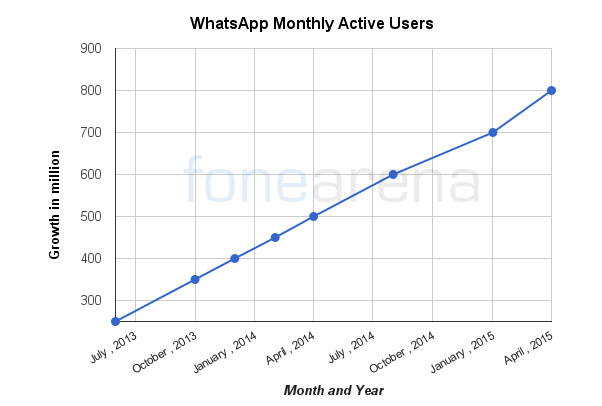 If this steady growth continues, WhatsApp may reach the psychological benchmark of 1 billion monthly active user base by the end of this year. Despite facing stiff competition from instant messaging apps such as Hike, Line, WeChat and Facebook Messenger, WhatsApp Messaging App has remained relevant for users with its awesome features and pledge for better user experience.

Recently, the company has launched its voice calling feature for Android users and expecting to make it available for Windows and iOs users soon.

You May Also Like :  5 Reasons Why Mobile Marketing A Must For New Startups